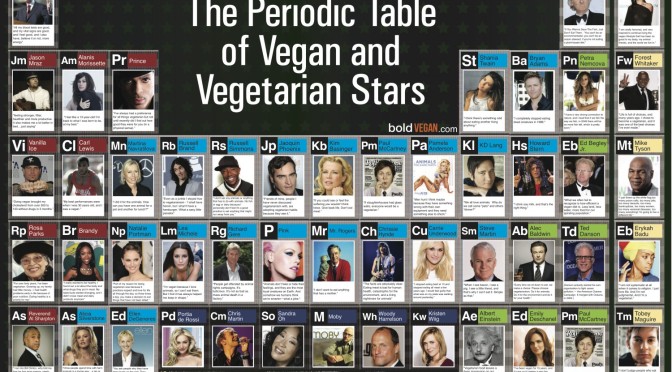 People from all walks of life can be vegan, and I’ll bet some of you will be surprised how many historical figures and celebrities are vegan or vegetarian.  I think a powerful message here is that you don’t have to have your life consumed or your profession revolve around your vegan lifestyle, it just means you see the Big Picture. 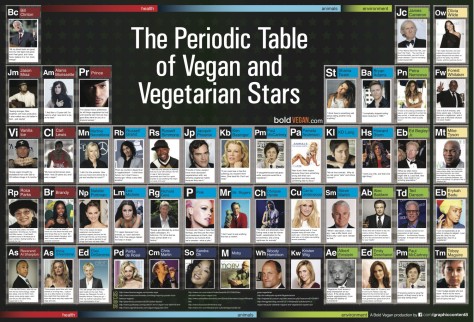 I was aiming for a diverse range of gender, race, and age, but I recognize my sampling will be largely American biased (and some categories are more skewed within G/R/A also), as I don’t feel exposed enough to evaluate the fame of many non-American figures.  PLEASE leave comments if you have suggestions.  We need more VEGAN ROLE MODELS.

Also some of these figures are mentioned as “strict vegetarian” and not specifically vegan, and I’m giving a pass to all Pre-1940s outspoken vegetarians, because there is simply no way to confirm veganism or not.

There have GOT TO BE more contemporary artists in this category, send them my way please!

From athletes to celebrities to politicians, there are so many people in our lives who we admire and who inspire us. On this guest blog post, Jessica Goodman shares her remarkable journey to veganism, battling against Juvenile Rheumatoid Arthritis. Her story is inspiring, with an entire family that went vegan and now each work as professional vegans. Travel through her list of ever expanding inspirational #veganrolemodels around the world. You may be surprised that someone you already admire is #vegan! Find the spark to help you or someone you know make the switch. Link in bio!
No need to go grocery shopping! Making plant milk is easy and fast and more wallet and eco-friendly. Just one cup of nuts like cashews and almonds or grains and seeds like rolled oats or hemp seed blended with four glasses of water and you are done!
Join @chefsuzigerber LIVE 11:30am EST on instagram tomorrow for the special Mother’s Day Brunch episode of The Sunday Brunch Show! Crepes are one of the most versatile classic brunch foods. Whether you like them savory or sweet, crepes can be filled with your favorite foods, so whether you are choosing to smother them in whip cream or vegan cheese, join her to make this delicate french pancake that will satisfy everyone in your household. This special #mothersday episode is a cook-along-with-mom edition, her 75-year-old-mother will be cooking along from her house in DC, and if she can do it anyone can! So grab your mom, or cook for her yourself, and whip up these delicious savory crepes.
While we are all still stuck at home, this is the perfect time to learn how to be self-reliant when it comes to your pantry staples– even the refrigerated ones!  Learn to make cultured and flavored cream cheese and sour cream from a few different shelf stable ingredients so you can stock up on the bulk dry goods and get cooking to keep you going. Dairy free options that are price friendly and delicious! Link in bio!
Some immune supporting legumes in your soup? Yes please! This delicious #vegan pea soup is quick, easy and packed with immune supporting ingredients. Stretch your resources out by using your leftover veggies or ones that are about to expire to make a veggie broth. Reduce your grocery store trips more by freezing the leftovers.
Getting tired of seeing the same four walls around you? Many of us are becoming more stir crazy by the seconds and itching to go travel! Our guest @vegan.traveldiaries takes you on an unforgettable trip around the world in just a few minutes. This virtual trip awill be exactly what that travel bug in you will need to #stayathome and instead start planning your future trips. Where are you heading to first? Link to your next vacation in bio!
Loading Comments...
%d bloggers like this: