On Saturday March 5, plant-based fighter Nate Diaz defeated featherweight champion Conor McGregor by rear naked choke in the second round. Although the fight wasn’t for the belt, it was the biggest win in Diaz’s career. 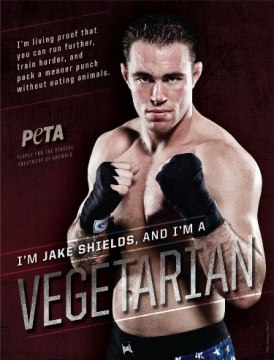 Unspoken by many in the media, Diaz is notable because he eats a plant-based diet. At times, Diaz
describes himself as a raw vegan, and at other times he claims that he eats no land animals or dairy products. Also underrepresented in the media, there are many vegan, vegetarian, and plant-based fighters in the UFC. In addition to Nate, his brother Nick, their training teammate Jake Shields,Ricardo Moreira, Jon Fitch, retired fighter Mac Danzig, and even hall-of-famer Randy Couture. Some of these fighters have fought for championships, and some have won belts. Most of these fighters did not choose to eat a plant-based diet because of ethical reasons, but because they recognize the health benefits of eliminating animal products from their diets.

To add another layer of vegan interest, Conor McGregor’s movement coach is Ido Portal, who is notorious for saying that he will not train with vegans. According to Portal, vegans lack the strength and energy that he expects in his training partners.

Of course, the reason that Diaz won was because his strength, energy, and excellent jiujitsu skills allowed him to work hard into the second round. During the first round, McGregor used effective movements and strikes. Diaz was able to secure the fight-ending choke in the second round because he had a more effective cardiovascular game, and his strength in grappling allowed him to secure the choke. From my perspective, Diaz’s diet was a major reason he won, because his endurance was superior, despite taking the fight on only 11 days notice.

Then again, Portal is a movement coach, not a fighting coach. He works to master isolated movements, and then to integrate them to form effective combinations, and then to develop a spontaneous form of effective movement. So perhaps he is speaking to that audience? Not so fast, two-time world champion free runner Tim Shieff is vegan. Here’s a highlight video of this awesome vegan from 2013.

And here’s a clip from Shieff performing on the incredible Ninja Warrior show.

Why is veganism the answer for fighters? One possibility that science offers is that vegan men have more testosterone than both vegetarian and omnivorous men.
It’s possible that because cholesterol in animal proteins restricts circulation and creates plaque in arteries, diets that include meat may prevent athletes from recovering from injury. Most importantly, these athletes listen to their own bodies. They experience firsthand the benefits of a plant-based diet.

It’s also significant to note that MMA’s roots are tied to a plant-based diet. In 1993, UFC was the brainchild of the Gracie family. Rorian Gracie, a vegetarian, invented the UFC, and Rorian’s father, Helio, the inventor of Brazilian Jiu-jitsu, was a vegetarian as well. The Gracie family created the UFC to show off the effectiveness of the martial art they created. BJJ is required knowledge for all mixed martial arts fighters, no matter their diet.

The intersection of combat sports and plant-based diets also has a historical precedent. Many sources report that the Shaolin Monks that invented Kung Fu were vegetarians. Recent archeological discoveries suggest that Roman Gladiators also ate a plant-based diet. The history of combat sports is littered with successful vegetarian athletes (and others like Mike Tyson, that became vegan after their careers).

And that’s saying something, because combat sports have a place on the short list of most physically demanding sports. Unlike football and baseball, which require a small set of physical movements that are repeated in 10 second increments, and basketball or soccer revolve around the movement of a ball, MMA involves boxing, wrestling, kickboxing, and jiu-jitsu. MMA matches can end quickly or can extend for 25 minutes of nearly uninterrupted activity. Conversely, marathon runners, swimmers, and climbers, focus on endurance duration activities. With the weight class structure, fighters train to be their most effective weight, and then they quickly diet and cut weight to show tremendous discipline and body mastery, which makes it perfect for sometimes-restrictive diets like plant-based diets.

And for your viewing pleasure, here’s a clip of Diaz’s big win.